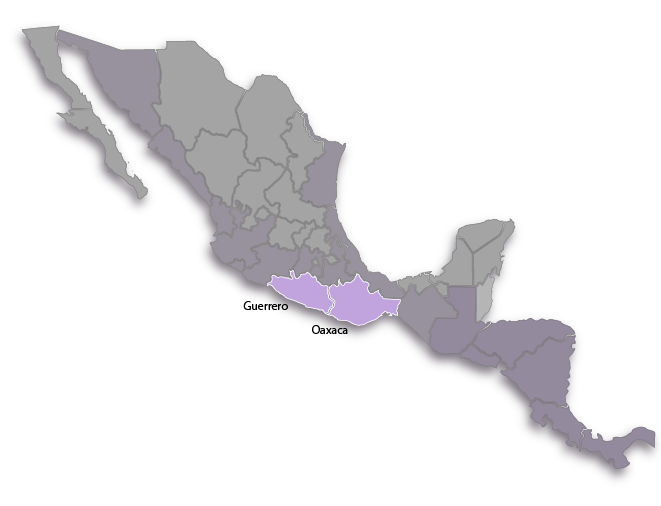 A caespitose, erect deciduous herb with an epiphytic habit that grows between 15-75  cm.  Roots: flattened, gray.  Stems: thin, fusiform, pedunculate (stalked), grayish-white, with 4-5 internodes, 2-25 cm. in length.  Older stems are covered with scarious, papery bracts.  Leaves: 2-6 linear-lanceolate, acuminate, distichous, subsucculent, present only on the newly developing growth and appressed to the stem via an articulated joint.  Inflorescence: terminal, erect, frequently arching, panicle (rarely a raceme), from the new growth, on an elongated subterete, rather thin peduncle with 5-9 internodes covered by tubular bracts (scarious at anthesis), from 6.5-35 cm in length with 3-60 flowers arranged in a horizontal plane.  Flowers: Attractive, resupinate, sweetly fragrant, 1.4-2.6 cm diameter spread, with the tepals straight and extended in the same plane and held over the descending lip. Color of the segments is variable in the population ranging from pure white to dark magenta with intense color saturation.  Sepals are usually somewhat darker than the petals with darker venation evident.   Lip is white, greyish-white or yellowish with magenta pigmentation over the raised veins and margins.  Sepals are subequal, extended, lanceolate, acute-acuminate, with seven conspicuous parallel veins, incurved or flat with the margins reflexed making them concave.  Petals are lanceolate, acuminate to obtuse, with five parallel vein, in the same plane as the dorsal sepal and positioned at a 45° angle to it.  Both lip and column point down in their natural configuration.  The lip is entire, ovate, acuminate, acute, basally cuneate, fused to the column, strongly concave with the basal margins raised and incurved, and the apex is extended or deflexed.  Callus is a white, raised platform, deeply sulcate to form a fovea with three longitudinal rows of white or transparent warty or papillose veins that extend forward but do not reach the apex.  The subtrigonous column is winged, short, pinkish or purple-red apically but green at the base, somewhat incurved, dorsiventrally flattened into a flabellate outline with a truncate but relatively wide apex with three teeth.  The ventral surface of the column is convex and longitudinally sulcate.  Anther is reddish and the same color as the apex of the column.

This species is known only from Guerrero and Oaxaca states in Mexico.  In these states it can be found on the Pacific coastal plain and some adjacent river valleys that make their way through the Sierra Madre del Sur mountains.  There are reports that this species is also found in Chiapas, but we think that those reports are incorrect as we have been unable to locate any suitable herbarium voucher to confirm this data.  There are also unsubstantiated reports that the species may be found in neighboring Michoacan.  These reports, on the other hand, are likely to be correct based on the fact that known stations of this species in Guerrero are very close to the Michoacan border and that suitable habitat for this species can be found on both sides of the border.

The species has large populations throughout its distribution range and is known from many stations.  It is more widespread and numerous than its close relative, B. strophinx.  In spite of the fact that Barkeria naevosa is not a particularly rare or uncommon Barkeria species, it is infrequently seen in collections and almost never offered for sale by commercial nurseries.  Perhaps the reason that it is not seen in collections is that it requires some skill to grow and so it is not a good species for a beginning Barkeria collector.    Also, orchids originating from Guerrero tend to be underrepresented in almost all private collections in Mexico and this probably has to do with the fact that the state has a reputation for banditry and lawlessness that scares off anybody from prospecting for this species in its natural habitat.

Dry oak forests or subtropical scrub.  It is commonly seen growing on vertical cliffs or rocky escarpments at the top of hills where there is a constant breeze.  It seems that this species requires high light levels including full sun, but the temperatures must be attenuated with cooling winds for the best growing conditions.  The roots are rarely seen growing into a substrate and prefer to be naked as they snake along the surface of a rock or tree branch.

This species grows at low altitudes anywhere from sea level to about 1500 meters in elevation.  It is a species that requires hot temperatures to grow well and it along with B. shoemakeri, B. dorotheae, and B. strophinx are the four hottest-growing species of the genus.

Identification:
There has been much confusion over the years about the limits between the species in the Obovata group.  Authors who were working strictly from dessicated herbarium specimens could easily fail to spot the differences among the four species in the group and reduce them in rank to synonymy or subspecies status.  With live plants, though, the differences are stark and easy to see.
Bloom time:

September – November.  The populations from Michoacán are in bloom as early as mid September.

This species is not at risk according to the Mexican government and does not merit any special protection.  It seems to be ignored by collectors perhaps sensing that the localities where it grows in Southwestern Mexico are too dangerous to visit.

The intense scarlet-magenta coloration of the flowers is highly desired in the progeny as is the tendency for hybrids made with this species to express yellow coloration.  It may seem counterintuitive but crossing with Barkeria scandens enhances yellow coloration rather than hides it.  The rachis is not very strong and an inflorescence with many flowers on it will cause it to bend over and produce a waterfall display of flowers.  This characteristic is heritable and can be used by breeders to produce arching sprays of flowers in hybrids.