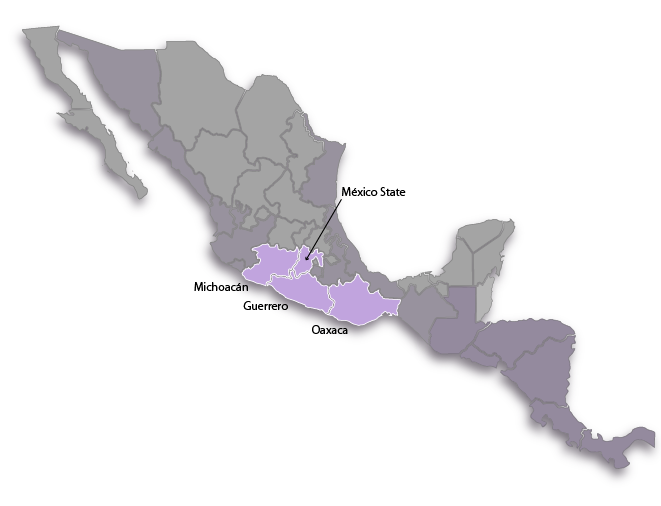 A compact, scandent, lithophytic, mat-forming species as seen in the plants from Michoacan.  Plants from Mexico, Guerrero and Oaxaca tend to grow taller and develop as individuals rather than as a mat-forming colony.  There is a preference for growing on rocks as a lithophyte but the plants from the Sierra Madre del Sur will grow as twig epiphytes, too.  Plants are usually 20-60 cm. in height but there are reports of plants from Guerrero that will grow over 100 cm.  Roots: white, thick, terete and usually unbranched.  Stems: Developing stems are 10-25 cm. in length and covered with clasping leaves. Older stems are leafless but covered with whitish-gray scarious bracts.  Leaves: distichous, ovate-elliptic to lanceolate, green in color but suffused with reddish-purple if grown in high-light conditions.    Inflorescence: The flowering stem is a straight, erect, raceme arising from the distal end of the most recently developed pseudobulb, approximately 10-55 cm. in length with 2-20 flowers at the apex.  Flowers: an eye-catching magenta in color with the petals and sepals in a fan-like arrangement above the lip.  There is normally a darker blotch at the tip of the lip and a white or cream colored area at the base of the column.  The pedicel bends abruptly at the union with the base of the flower causing the flowers to be presented with their lip and column pointed straight down.

Endemic to Mexico in the Transverse Volcanic Belt (The states of Michoacan and Mexico State in Mexico) and the Sierra Madre del Sur (Guerrero and Oaxaca).

Populations are scattered and non-contiguous. It tends to grow in highly localized ecological niches where it can be rampant, but will not colonize adjacent areas with seemingly suitable habitat.  Relatively rare in the wild.

Dry oak forests or subtropical scrub.  It is commonly seen growing on vertical cliffs or rocky escarpments at the top of hills where there is a constant breeze.  It seems that this species requires high light levels including full sun, but the temperatures must be attenuated with cooling winds for the best growing conditions.  The roots are rarely seen growing into a substrate and prefer to be naked as they snake along the surface of a rock or tree branch.

It can be easily confused with the closely related species of Barkeria lindleyana and Barkeria
vanneriana since all three of these species have dark magenta flowers with a white blotch at the base of the lip. However, Barkeria lindleyana is naturally found only in Costa Rica and never in Mexico so it can be differentiated solely on account of its geographic distribution.  Barkeria vanneriana and Barkeria scandens grow sympatrically at some stations in its distribution range in Mexico and can be difficult to distinguish, except that their growth habits easily set them apart, vegetatively speaking.  Barkeria vanneriana is a climbing species in which new leads develop 2-3 internodes above the base of the previous growth and the plants will have a tendency to grow vertically over time usually up rock surfaces or cliffs.  In contrast, Barkeria scandens is better behaved and has a sub-caespitose habit.  This makes it a better candidate for greenhouse culture since it will break a new lead usually only one internode higher on the previous year’s growth. Barkeria lindleyana is strictly clump-forming (caespitose) and will almost only develop new growths at the base. Regarding the flowers, Barkeria vanneriana has larger flowers than B. scandens, spotted column and the lip has a rectangular outline versus the orbicular or elliptic lip profile seen in Barkeria scandens.  The lack of spotting on the column is diagnostic for this species, as this feature easily differentiates it from B. vanneriana and B. lindleyana which always have spots on the column.

September – November.  The populations from Michoacán are in bloom as early as mid September.

According to the Mexican government, this species is “Under Special Protection”.  This category was established to protect species that still have large populations but which are still under threat by over-collecting or habitat destruction.

The intense scarlet-magenta coloration of the flowers is highly desired in the progeny as is the tendency for hybrids made with this species to express yellow coloration.  It may seem counterintuitive but crossing with Barkeria scandens enhances yellow coloration rather than hides it.  The species is easily grown although it requires cool evening temperatures in the fall when the spike is emerging for the flowers to showcase their maximum splendor. The flowers will last up to three weeks as cut flowers and this durability may be imparted to the hybrids.