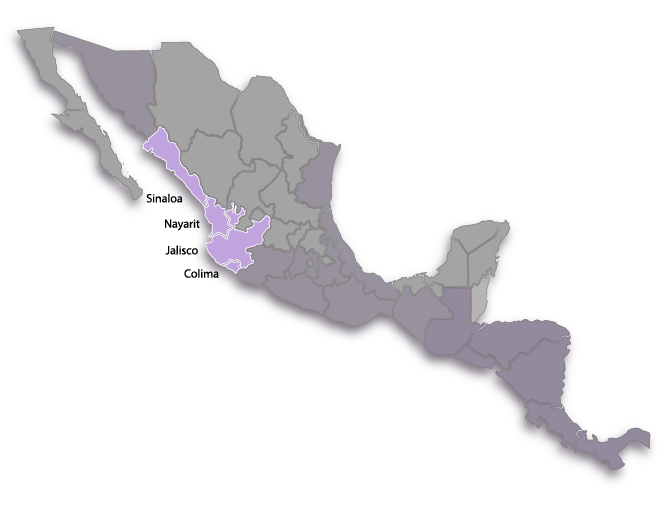 An erect, slender, deciduous herb with an epiphytic habit (very rarely rupicolous) that grows between 10-45 cm.  Roots: thin, terete, long, rarely branched, white in color with green tips.  Stems: grayish-white, thickened, slightly compressed laterally, 4-16 cm. in length.  Older stems are covered with scarious, papery bracts. Leaves: 4-5 lanceolate, acute to acuminate, distichous, coriaceous to subsucculent, present only on the newly developing growth and appressed to the stem via an articulated joint.  Leaves are green but suffused with reddish-purple pigmentation, particularly on the margins and abaxial surface of the lamina.  Inflorescence: terminal, erect, straight, unbranched raceme, from the new growth, on an elongated subterete, rather thin peduncle covered by tubular bracts (scarious at anthesis) 4-27 cm. in length with 2-10 flowers.  Flowers: Small, attractive, resupinate, inodorous, 2.5-3.5 cm diameter spread, tepals pale lilac and lip white with the exception of a darker apical blotch of striking and saturated color intensity.  Dorsal sepal smaller than lateral sepals, elliptic, acute to subacuminate, basally unguiculate, with seven parallel nerves.  Lateral sepals are obliquely oblanceolate, acute to subacuminate, basally unguiculate, with seven parallel nerves.  Petals are shorter and wider than the sepals, ovate to oblanceolate, acute and longitudinally sulcate on both adaxial and abaxial surfaces.  Both lip and column are descending in their natural configuration.  The lip is entire, elliptic to subovate, convex, strongly appressed to the column and with a rounded or mucronate tip.  The basal margins of the lip are raised and wrap around the column while the base is adnate to the column for a short distance.  Callus generally absent except for an elevated platform directly beneath the lip that is deltoid in shape with seven short, magenta veins extending apically.  The column is creamy white and yellow with the recurved wings greenish in color at the margins.  The dorsal surface of the column is suffused with dark purple lines basally turning into spots apically while the anther is pale yellow.  The trigonous column is dorsiventrally flattened into a obtriangular shape with a shallow groove on the ventral surface.  The clinandrium topped with three poorly-defined teeth.

The distribution of this species encompasses the Pacific Coastal Plain of Mexico and winds through the states of Sinaloa, Nayarit, Jalisco and Colima.  This species never strays too far from the coastline and its most inland station is less than 100 miles from the coast.  To our knowledge, this plant does not grow in Michoacán.  There is a population of plants from central Michoacán that has traits intermediate with B. uniflora but we have been unable to reach the area to examine the plants in detail.  This taxon may turn out to be a new species or perhaps DNA analysis will reveal that it is of hybrid origin owing to introgression of genes from more than one species.  Except for a small area near Puerto Vallarta in the states of Nayarit and Jalisco where the two species are sympatric, B. uniflora and B. barkeriola are almost perfectly biogeographically separated.

Infrequent but not rare.  The small size of the plants, their deciduous nature during the dry season, and their short-lived, small flowers mean that the species is easily overlooked.  The plants seem quite prolific at their localities and suitable porophyte hosts are frequently plastered with plants on every available branch and twig.

Barkeria barkeriola is almost always encountered as a twig epiphyte on trees and scrub brush (rarely on rocks) in tropical deciduous and subdeciduous forest.  It demonstrates a preference for growing on trees of Crescentia alata and Psidium spp.  This species establishes on trees on hillsides or in ravines and often can be seen at the edges of creek-valleys even if these watercourses only carry water during the rainy season.  Since these plants grow near the Pacific Ocean, they consistently receive moisture from ocean breezes and are accustomed to having humidity levels consistently above 75% throughout the year, even in the dry season.  Daily temperatures at this species’ stations average 27-28°C during the summer and around 18°C at night.  In the winter, the temperatures are balmy and range from 13 to 23°C.  Its proximity to the ocean means that diurnal temperatures are always quite comfortable, albeit humid, and they do not get as infernally hot and dry as the inland basins where B. uniflora grows.

This species is very warm-growing and establishes at sea level as low as barely above the level of the high tide up to about 1000 meters.

Owing to its diminutive stature and biogeographic distribution in Western Mexico, this species is fairly easy to identify when observed in-situ compared to its other close cousins in the Uniflora section.  Nevertheless, we can enumerate several key characteristics that would allow somebody to quickly differentiate this species from B. dorotheae, B. shoemakeri and B. uniflora even if context regarding its geographic locality was unavailable.  In the case of B. dorotheae, the plants and flowers of this species are much larger.  Similarly, the flowers of B. dorotheae do not have the characteristic magenta-colored blotch on the apex of the lip that is seen in B. barkeriola and the margins of the lip are strongly reduplicate to give the lip its characteristic saddle shape.   With regards to B. shoemakeri, the plants are harder to tell apart because both of these species tend to have their abaxial leaf surfaces and stems suffused with purplish-red mottling.  But, the leaves of B. shoemakeri are more acuminate and far fleshier and succulent than those of B. barkeriola.  Their flowers are quite distinct and easily distinguished at first glance, and so a more involved explanation is not necessary.  The species most easily confused with B. barkeriola is B. uniflora.  Except for a small area near Puerto Vallarta, Mexico on the border between Jalisco and Nayarit, the two species have disjunct populations and do not grow together.  As a rule, plants of B. barkeriola grow at lower elevations than those of B. uniflora, and the stem length of the plants should be considered a diagnostic feature since B. barkeriola is much smaller in all aspects than B. uniflora, which grows at least two times taller.  The flowers in B. barkeriola are much smaller, the lip blotch is more intense and saturated in color, and the tepals are arranged in a fan that rarely surpasses 180° degrees in its arrangement.

One of the earliest species in the genus to bloom with some specimens flowering as early as August or September.  This means that flowering commences in some cases before the summer rainy season has ended.  The bloom season extends until November.  This means that even in the small area of Nayarit and Jalisco where B. barkeriola grows close to the most northern populations of B. uniflora that the species do not interbreed because they are temporally isolated, meaning that the two populations are blooming at different times.  The difference in timing of their flowering seasons ensures that it is very difficult for natural hybrids to occur, notwithstanding that the plants are also suspected of having different insect pollinators as presumed by the marked difference in size between their respective flowers.  All of the aforementioned traits provide ample evidence that this species is not just a dwarf variant or subspecies of B. uniflora.

This species is not at risk according to the Mexican government and does not merit any special protection.  The plants may not be extremely abundant at their localities but the population is relatively widespread.  Since the plants have small, ephemeral flowers, and the plants themselves are also short-lived and relatively difficult to cultivate, the plants receive little attention from collectors.  Thus, there is almost no collecting pressure on wild-plants and the only risk for in-situ plants is habitat destruction.

Barkeria barkeriola has been used in few hybrids but we imagine that is mostly on account of it being one the rarest Barkeria species in ex-situ cultivation.  It has only two registered crosses, made using B. lindleyana and B. uniflora as seed (capsule) parents.  At first glance, this species would not seem to have any outstanding characteristics that would merit its use in a hybrid.  Admittedly, even we have derisively labeled the species in the past as “the poor-man’s B. uniflora”.  But, we have discovered that in the case of Barkeria Robert Marsh (B. uniflora x B. barkeriola) that the interplay of genes from the two closely-related parents make the flowers of the hybrid extremely long-lasting.  Indeed, they last more than three months in absolutely pristine condition.  Another interesting effect is that the B. barkeriola genes shrink the size of the plant of the resulting hybrid but do not affect the size of the flowers.  So in a hybrid like Barkeria Robert Marsh it is possible to have a compact plant producing very large flowers with their diameter approaching that of a full-size B. uniflora.