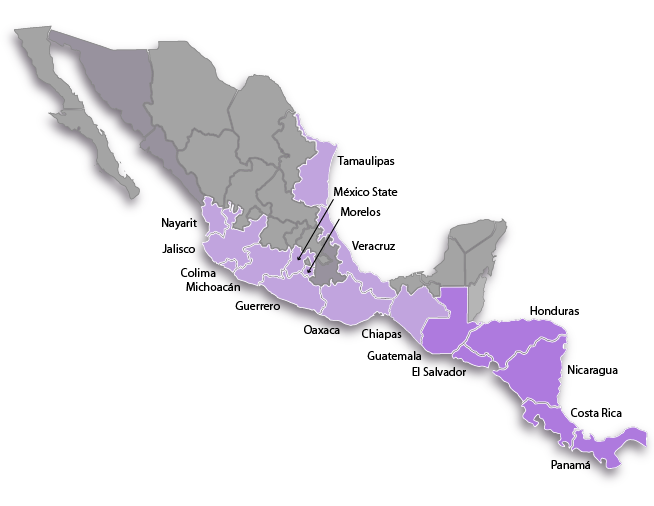 An erect, caespitose, deciduous herb with an epiphytic habit that grows 10-75 cm.  Roots: flattened, whitish-green.  Stems: thin, fusiform, pedunculate (stalked), grayish-white, somewhat compressed with 4-7 internodes, 1.5-15 cm. in length.  Older stems are covered with scarious, papery bracts.  Leaves: 2-4 linear-lanceolate, acuminate, distichous, basally obtuse or truncate, conduplicate, flexible, abaxially carinate, subsucculent, present only on the newly developing growth and appressed to the stem via an articulated joint.  The leaves are normally greyish-green and are often suffused with brownish-red pigmentation but in high light conditions these can be completely dark purple-red.  Inflorescence: terminal, erect, 45 cm long panicle with 1-6 branches from the new growth with leaves present but beginning to dry at anthesis.  The subterete peduncle with up to 7 internodes is elongated and up to 29 cm long, covered with scarious, white, tubular bracts with 1-70 simultaneous flowers on a congested rachis with short branches. The pedicellate ovary is thin with an inconspicuous decurrent swelling apically marking the position of a functional, shallow cuniculus (nectary).  Flowers: Attractive when open and chasmogamous or unattractive and barely opening when cleistogamous, resupinate, inodorous, 1.5-2.5 cm in diameter, creamy-white (ivory) tepals occasionally blushed with faint yellow and extended in the same plane in a radial arrangement over the descending lip.  The lip is cream colored and overlaid with a band of golden-yellow pigmentation extending axially with purplish-red spotting and lines radiating in the pattern of raised veins.  In some specimens the lip is almost entirely yellow with only the margins outlined in cream while others are immaculate.  Sepals are subequal, lanceolate to lanceolate-elliptic, acuminate, almost flat to slightly concave with the apex recurved and with 5 parallel nerves.  Petals similar to the sepals, narrowly lanceolate, somewhat oblique margins, abaxially sulcate, cuneate basally, with 3-5 parallel nerves, and flat or longitudinally concave.  The lip is entire, extended and obovate, subrhombic or elliptic in shape.  The lip is basally adnate to the column with incurved lateral margins while the distal tip is rounded or obtuse.  In some specimens, the margins of the lip above the midpoint are minutely denticulate or erose.  The basal callus is elliptic, creamy-white in color and deeply sulcate with two rounded horizontal lamella that extend towards the apex of the lip.  There is a band of raised tissue between the two lamella that almost reaches the apex of the lip.  This band is covered with yellow, warty protuberances that are also seen on the raised veins that radiate outwards from the callus towards the lip margins.  Column is whitish-green blushed with red dorsally but dark reddish-purple on the ventral aspect and capped with a prominent, fleshy, carmine-red or magenta, saddle-shaped, bilobular anther cap.  The column is straight, subtrigonous, and dorsiventrally flattened into a obtriangular shape with a sulcate ventral surface.  The clinandrium is topped with three projections, of which the central one is triangular, hamate, obtuse, and projects out past the two lateral ones.  The stigmatic cavity is transversally elliptic and shallowly concave.  A semi-elliptic, white rostellum is present in chasmogamous flowers but is absent in cleistogamous clones.

Far and away the most widely distributed of all of the species in the genus.  The range of the species begins as far north as the state of Tamaulipas on the gulf coast of Mexico and continues down into Veracruz.  It is the only species of Barkeria that is not restricted solely to the Pacific watershed in its distribution.  On the Pacific side of Mexico its most northern reported station is on the border between Nayarit and Jalisco and it then appears in every coastal state south of there along the Pacific Coastal Plain in Colima, Michoacán, Guerrero, Oaxaca and Chiapas.  In Chiapas it is found in both the Soconusco region adjacent to the coast and also inland in the Central Depression.  There is a disjunct population in the center of the country in the Balsas River Depression in Mexico State and Morelos and it is possible that it was through this corridor that the species jumped from one coast of Mexico to the other.  It is also the only species of Barkeria that was able to cross over the Isthmus of Tehuantepec in Oaxaca.  This area is extremely dry, windy and hot and so it is a natural geographic barrier to the movement of orchid species from Central America into Mexico or vice-versa.  All other Barkeria species are restricted to growing either north or south of the Isthmus of Tehuantepec.  Heading southward past the isthmus, the distribution of Barkeria obovata continues into Chiapas, Mexico and then Guatemala, Honduras, El Salvador, Nicaragua, Costa Rica and Panama.  Its most southern station is in the northwestern part of Panama near the Costa Rican border.

Contrary to its heterotypic specific epithet, the plant does not grow in China.  When Lindley wrote the description to what he thought was an undescribed species, he was erroneously informed that the plant in question came from China and Barkeria chinense was the name that resulted.  This error was realized and seemingly brilliantly rectified with the stroke of a pen in 1855 when the plant was rechristened Barkeria nonchinense, or the non-Chinese Barkeria.  Of course, nomenclatural rules do not allow such a thing, no matter how well-intentioned a botanist may be.  The plant would still be named B. chinense, and result in botanists facepalming in embarrassment to the present had it not been for the eagle-eyed Eric Christenson.  He located an earlier description of this species from a specimen collected in Panama, and nomenclatural rules rode to the rescue.  Thanks to him we do not have to explain awy a “Chinese” Barkeria.

This species is very widely distributed and it has stations in many different countries.  There are two variants of this species and we have found the cleistogamous form to be extremely dominant in terms of its distribution.  Cleistogamous refers to plants whose column lacks a rostellum to divide the anther from the stigmatic cavity, and so it permits plants to spontaneously self-pollinate without the need for an intervening pollinating insect.  In experiments that we have conducted, we have found that cleistogamous plants when crossed with non-cleistogamous plants produce cleistogamous seedlings and so this genetic “defect” is dominant in progeny.  This means that populations of non-cleistogamous plants must be kept allopatrically separated from populations of cleistogamous plants, lest the genetic trait will run rampant through the population.  We say that this cleistogamous trait is a “defect” only because it does not allow or at least severely limits the possibility of sexual recombination of genes in outcrosses which may make this species less adaptable to changes in its environment.  But don’t tell that to the plants because the fact that the species is self-pollinating means that it becomes a weedy pest in its habitat with thousands of specimens strewn throughout the trees and bushes.  A collector won’t find the cleistogamous form for sale anywhere because the flowers only last 1-2 days before they senesce after pollination.  The more attractive plants have a functional rostellum in the column and are non-cleistogamous.  But these plants seem to be quite rare with disjunct populations in valleys that are not contiguous with populations of cleistogamous plants.

This Barkeria grows in a wide range of habitats with the cleistogamous form having a preference for more xeric and exposed places.  In Mexico, the cleistogamous form is found in the Western part of the country in Jalisco, Colima, and parts of Michoacán, Guerrero and Mexico State.  Under these conditions the plants have a high specificity for specific porophyte hosts such as Crescentia alata, Haematoxylon brasiletto, and Spondias purpurea and prefer to grow in tropical deciduous forest.  It also takes advantage of disturbed areas and is frequently seen in cattle ranches, fruit orchards or in cultivated Citrus spp. trees near homes in small villages.  The more southern populations show a decreasing preference for cleistogamy, and are frequently found in more humid environments.  In Mexico the non-cleistogamous form can be observed in riparian habitats where it grows in close association as a twig epiphyte hanging over flowing water currents with Taxodium mucronatum.  In Central America, this species is seen growing in rain forest or also in disturbed vegetation in coffee plantations.  It is mostly encountered as a canopy twig epiphyte in all habitats and rarely will it grow as a lithophyte, near the ground or on the trunks of trees which means that it seems to prefer higher levels of luminosity.

It can found growing from sea level to 1,600 meters in elevation.  It grows in a wide range of elevations because the plant is very adaptable and so it can successfully colonize many distinct biomes.  It is one of the few plant species that can grow in extremely xeric, tropical deciduous forest but also grow in primary tropical rainforest with near constant rain and humidity.  Surprisingly, it is also able to colonize secondary, disturbed areas that are perturbed by human activities.

Plants in the field are easily identified when seen with flowers since the coloration of this species is quite distinct from all other species in the genus.  Likewise, plants with fusiform pseudobulbs encountered late in the flowering season with many seed capsules (especially if every flower seems to be pollinated) can be determined to be the cleistogamous form of B. obovata, and the identification can nearly be conclusive if a close examination of the distal end of the seed capsule reveals an absence of a nectary which would eliminate B. strophinx and B. naevosa as possibilities.  The species most likely to be confused with B. obovata would be B. palmeri.   These are closely related species and some notable orchidologists, such as Thien and Dressler, incorrectly reduced B. palmeri to a subspecies of B. obovata on account of their similarities.  With flowers, these two species are easily identified based on the colors of the flowers (pink vs. white), but if plants are encountered without blooms then the plants cannot be distinguished using only vegetative characteristics.

This is a winter-blooming species that flowers between December and March with the peak bloom season encompassing most of the month of January.  This data is for the non-cleistogamous, or sexually-reproducing, variant.  The cleistogamous variant’s flowers pollinate so quickly that the flowers are only visible for a day or two and so are commonly encountered only with seed capsules in the field.

Barkeria obovata has many stations throughout its range and the plants seem to be overlooked by collectors.  Additionally, the vast range of the species means that it would be highly unlikely for the species to become extinct or even threatened.  This species is probably the Barkeria that is best positioned for continued in-situ survival.

The two most interesting characteristics of this species are the warty yellow lip with the red dots and the creamy-white color of the tepals.  Unfortunately, the yellow lip color is very difficult to breed into hybrids because every other Barkeria species with significant anthocyanin pigmentation in its flowers will overwhelm the yellow in the lip.  The only way to circumvent this is to breed with B. naevosa and B. scandens.  Both of these species have a genetic makeup that allow for xanthophyll expression even if there is strong dominant magenta coloration.  Hybrids made with B. naevosa and B. scandens like B. Oaxacan Showers or B. Lulubelle can have intense yellow showing up in the lip, and even more complex hybrids with these species in the background will occasionally produce progeny two or three generations down the line with yellow in the lip.  With regard to the white tepals, that is an easier characteristic to work with since one only needs to cross an alba clone of another species with B. obovata to maintain the white color in the flower segments of the resulting progeny.  Recently a major push of our breeding program is for xanthophyll pigment expression in the tepals.  Some promising F2 crosses made with B. Oaxacan Showers demonstrate great promise in achieving a vivid, concolorous yellow flower without having to resort to intergeneric crosses.