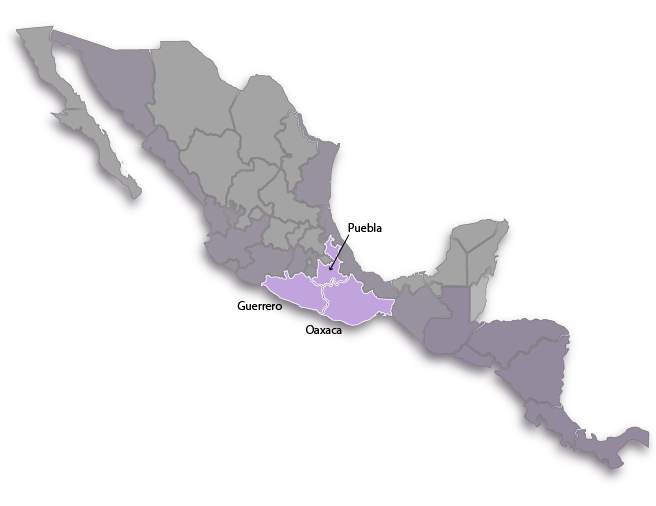 A scandent or climbing deciduous herb with a rupicolous habit (very rarely epiphytic) that grows between 45-100 cm.  The plant has a lax disposition and so tends to fall over, lean or become pendulous if its aerial roots cannot attach firmly to a rock substrate.  Roots: thickened, terete, long, fleshy, rarely branched, white in color with green tips.  Stems: grayish-white, thickened, slightly compressed laterally with 9-11 internodes, 6-16 cm. in length.  Older stems are covered with scarious, papery bracts. Acrotonic, new growths develop with 5-6 internode spacings between them (approximately 3.5-8 cm. apart) and higher than the previous growth which results in the formation of an ascendant sympodium.  Leaves: 5-7, lanceolate-elliptic to ovate, acute to subacuminate, distichous, coriaceous to subsucculent, present only on the newly developing growth and appressed to the stem via an articulated joint.  Leaves are green but suffused with reddish-purple pigmentation, particularly on the reverse of the lamina.  Inflorescence: terminal, erect, straight, unbranched raceme, from the new growth, on an elongated subterete, rather thin peduncle covered by tubular bracts (scarious at anthesis) 15-90 cm. in length with 3-18 flowers.  Flowers: Attractive, resupinate, inodorous, 3.0-4.5 cm. diameter spread, lilac to magenta with intense color saturation.  The lip is concolorous with the tepals with the exception of a darker apical blotch and a prominent white or pale pink circle on the disk.  Sepals are subequal, lanceolate to narrowly elliptical, subacuminate, wider at the base and with seven parallel nerves.  Petals have a grooved underside, subapiculate, and obliquely elliptic, subovate-rhombic or oblanceolate with  seven nerves on the dorsal surface.  Both lip and column point down in their natural configuration.  The lip is entire, panduriform to subovate and extended; the basal margins of the lip are cordate, incurved and wrap around the column while the base is narrowed at its attachment to the column;  lateral margins are slightly deflexed while the distal end has slightly undulating margins; and the apex of the lip is rounded or subtruncate, sometimes emarginate.  The callus is cream-white in color except under the column where two lamina with purple longitudinal striping delimit an elliptical fovea.   The exposed part of the callus converges into three raised longitudinal keels, with the central one reaching all the way to the apex of the lip and becoming more elevated at the terminus.   The column is magenta with the recurved wings greenish in color and suffused with dark purple spots.  The trigonous column is dorsiventrally compressed into a obtriangular shape and the ventral surface has a shallow groove that ends in a dry basal cuniculus.  The clinandrium is topped with three projections, of which the central one is widened and flattened to partially obscure the saddle-shaped, white, anther cap.

This species is widespread and can be found in three Mexican states.  In Puebla it grows in the Tehuacan-Cuicatlan Valley, a dry desert-like area that also overlaps with the northern part of Oaxaca.  Barkeria vanneriana is the only species of Barkeria reported from the state of Puebla, but this area of Mexico is part of the drainage basin for the Balsas River that drains most of the southwestern part of the country so it is not surprising to find this species here.  This species also grows in dry areas of the Sierra Madre del Sur Mountains in Guerrero and Oaxaca.  Lastly, it can be found in the central valleys of Oaxaca near Oaxaca City.

This species rarely forms colonies, but numerous, widely-distributed individuals can be seen at localities in its native habitat.  Occasionally, large specimen plants can be seen when growing conditions are ideal and the plants are able to develop numerous simultaneous growths.  Population studies have never been conducted, but the species should be considered infrequent but not rare.

This Barkeria very rarely establishes epiphytically and prefers to grow on rocky outcrops, cliff faces or steep, crumbling rocky slopes where, owing to its ability to survive extreme xeric conditions and its acrotonic, climbing habit, it will thrive and outcompete other plants.  In the Tehuacan-Cuicatlan valley it can frequently be seen growing in xerophytic scrub with columnar cacti.  In the Sierra Madre del Sur mountains in Guerrero and Oaxaca it will grow in a wide range of habitats from tropical deciduous forest at the lower end of its elevation range to oak forest at higher elevations.  In situations where the plants are shaded, the plant will have a lax disposition with the rachis elongated to the point that it may become pendulous.  It will often grow with its roots creeping in and among the leaf rosettes of different genera of lithophytic bromeliads such as Tillandsia, Hechtia and Pitcairnia on exposed rocks in full sun conditions.  In these cases its leaves may turn purplish-red in response to the high light conditions.

This species can be found in a wide altitudinal interval between 950-2000 meters.  Barkeria vanneriana, along with Barkeria scandens, are the species in the genus that are most adaptable to the widest range of temperatures.  Since these plants come from xeric habitats, they are used to wide swings between diurnal and nocturnal temperatures.  The low atmospheric humidity means that there is little water vapor in the air to buffer air temperatures.  With low thermal inertia, searing hot days can quickly change to very cool nights.  This pronounced oscillation between day and night temperatures is perhaps one of the most difficult things about properly growing Barkeria plants ex-situ.  Many growers with greenhouses can give the plants the day temperatures that they enjoy, but it is far more difficult sometimes to allow greenhouse temperatures to drop at night, especially when growing a mixed collection of plants. Barkeria vanneriana and B. scandens are two species that benefit greatly from allowing them to cool at night.

In the field, the plants are relatively easy to identify mostly on account of their climbing habit and their rupicolous proclivity.  Generally speaking, any Barkeria plant found in Mexico growing on a rocky outcrop in the states of Guerrero and Oaxaca can be assumed to be Barkeria vanneriana because this species is the most widespread of the rupicolous Barkeria species and is, thus, the most likely taxon to be encountered.  The other species that may be found on rocks, B. fritz-halbingeriana, B. scandens, B. melanocaulon, and possibly B. whartoniana all grow in very localized populations and are extremely scarce.  Of the species previously mentioned, only Barkeria scandens grows sympatrically with Barkeria vanneriana.  Surprisingly, even though they sometimes grow in the same location they do not form natural hybrids.  However, in Oaxaca there are some forms of Barkeria vanneriana whose flowers seem to exhibit some introgression from Barkeria melanocaulon, but it is anyone’s guess as to how long ago this occurred or whether this actually happened.  Since Barkeria melanocaulon is a late spring bloomer and is not in bloom when B. vanneriana flowers it is a bit of a stretch to imagine the hybridization occurring naturally in the first place!

If we are talking about plants encountered in the field, the plant most easily confused with Barkeria vanneriana will clearly be Barkeria scandens.  Generally the way that they can be distinguished is because Barkeria vanneriana will have more of an obvious climbing habit than Barkeria scandens.  Barkeria scandens will form crusts or mats over rocks whereas B. vanneriana will form tangles of aerial roots and stems over time.  Some other differences are that B. vanneriana’s flowers are generally paler in color, and the flower’s lip is more rectangular (as opposed to orbicular) with obvious raised keels and a central white blotch on the disc.  The petals are generally broader in Barkeria scandens and are quite different from the sepals even if the flowers tend to be smaller in diameter.  In our experience, the easiest way to distinguish the two species is to look for the presence of spots on the column.  It is not 100% foolproof because there are some B. scandens plants that will have spots on the column, but these are extremely rare.  So rare, in fact, that generally speaking, that the lack of spotting on the column can be used to identify B. scandens with a very high degree of confidence.

In nature, Barkeria vanneriana could never be confused with Barkeria lindleyana on the basis that they grow in different countries and, thus, can be perfectly distinguished by geography.  On the other hand, there is the issue of identifying plants in collections that are grown ex-situ.  Separating these two taxa when they lack geographical context can be quite tricky but there are a few key differentiating traits.  First, Barkeria lindleyana has larger flowers than B. vanneriana with a bigger white blotch on the disc of the lip, and rhombic, acuminate petals.  Closer examination of the flower segments in B. lindleyana reveals a big disparity in size and shape between the petals and sepals, whereas in B. vanneriana the flower segments are very similar in size, coloration and shape almost to the point where the petals are indistinguishable from the sepals.  Of course there are big differences in the growing habits of the plants, as well.  Barkeria lindleyana is an obligate epiphyte that is never seen growing on rocks and it has a well-mannered, caespitose growing habit.  In contrast, Barkeria vanneriana has a lithophytic lifestyle (very rarely will it grow epiphytically) and an acrotonic, scrambling, climbing manner of growth.

Older literature once considered B. vanneriana to be a subspecies of B. lindleyana on account of the superficial similarities in the flower shape.  But this is an example of convergent evolution rather than evidence for presumed kinship between the two taxa.  The ability to sequence DNA and elucidate the phylogeny of the genus now shows that they are not closely related at all and that both should be considered “good” species.  Molecular data also demonstrates that B. vanneriana is, in fact, most closely related to B. scandens.  It is very interesting that B. scandens and B. vanneriana diverged only recently, but the speciation barriers are so pronounced that they can be sympatric in some localities but will not interbreed.

This species is the first of many in the genus to begin blooming in the fall at the end of the rainy season in Mexico.  September seems to be the peak month of bloom for this species in their native habitat.  Some aberrant specimens may flower as early as late July while the occasional straggler will not finish flowering until November.

This species is not at risk according to the Mexican government and does not merit any special protection.  As mentioned previously, the species is widespread throughout southwest Mexico even if it is not abundant in any one locality.  As is common for many Barkeria and showy orchid species in Mexico, the inflorescences are collected as ornamental flowers, particularly for commercialization during Day of the Dead celebrations (November 1 & 2).  This harvesting has historically been done in a sustainable, relatively low-impact way, for the most part, by indigenous people for local ceremonies; but if the sale of wild-collected flowers were promoted more in the major cities then the spike in demand could cause problems for wild populations.

This species has been used in few hybrids because its flaws as a parent in offspring significantly outweigh its positive attributes.  The scrambling growth habit so characteristic in this species is extremely undesirable in progeny because it makes the plant difficult to cultivate in a greenhouse setting.  The few positives that the plant has in terms of flower shape and size, can be achieved by substituting B. lindleyana without needing to deal with the concomitant messy, rambling growth that a hybrid made with B. vanneriana would exhibit.  As for flower color, B. scandens is a much more desirable parent, because the flowers in the hybrids would not only be darker and more vivid in color, but the plants would also be much better behaved.