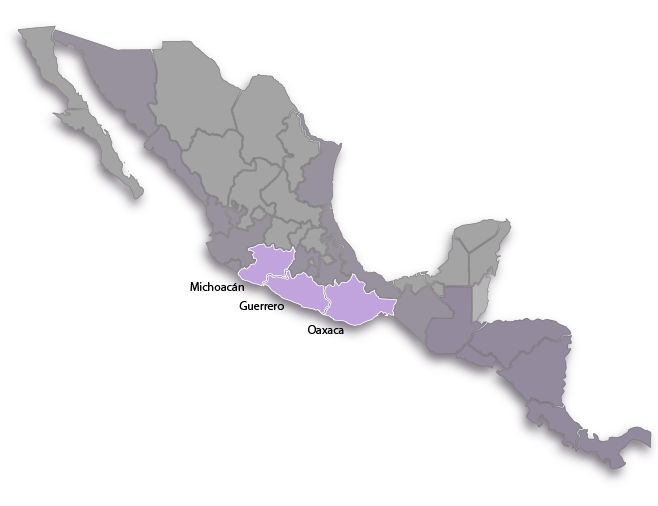 An erect, caespitose, deciduous herb with an epiphytic habit growing between 8-45 cm. in height but on rare occasions to 70cm.  Roots: flattened against the porophyte host or subterete, long, rarely branched, white in color with green tips.  Stems: grayish-white, thickened, fusiform with 4-7 internodes, 2-14 cm. in length.  Young stems are green covered with purplish spots while older stems are covered with scarious, papery bracts. Leaves: 2-6 ascendent-erect or arched, distichous, lanceolate, acute, very succulent but still flexible, present only on the newly developing growth and appressed to the stem via an articulated joint but generally only present on the distal half of the stem.  Leaves are green and conduplicate, splotched with dark green adaxially, while the reverse is carinate and suffused with reddish-purple spots.  Inflorescence: terminal, erect, lax, panicle with 2-4 branches (rarely a raceme), from the new growth, on a peduncle covered by tubular bracts (scarious at anthesis), 7-60 cm. in length with 3-40 successive, slightly pendulous flowers with 2-3 flowers open at any time.  Flowers: attractive, resupinate, weakly fragrant diurnally, 1.3-2.3 cm diameter spread, pinkish-purple to white blushed with pink, and with the tepals extended over the lip in a fan-shaped disposition.   Sepals are longer and wider than the petals.  Dorsal sepal erect or sometimes incurved, ovate-lanceolate to oblanceolate, obtuse, rounded to subapiculate, wide base or even clawed, with three branching veins and dorsally subcarinate.  Lateral sepals incurved, obliquely lanceolate or elliptic, falcate, acute to subacute with five branching veins and dorsally subcarinate.  Petals extended, nearly flat, obliquely lanceolate, broadly ovate or elliptic, acuminate to obtuse, subapiculate, subunguiculate at the base, longitudinally sulcate on both surfaces and with three branching veins.  Lip descending, fused to the column via a cuadrate, concave claw that protrudes abaxially as a bump on the underside of the flower.  Lip is variable in shape, ovate, rhombic obovate to elliptic, acuminate to obtuse, mostly flat but sometimes reduplicate at the apex or deflexed.  Margins are frequently white, basally erect while apically repand and pleated.  Lip is white to pale pink-lilac but with the veins pigmented in brilliant magenta.  The callus forms a raised platform, white, subcuadrate, concave or canaliculated, thickened which terminates in a triangular mucro.  There are three raised longitudinal keels somewhat yellowish in color at their midpoint and papillose in texture.  The eight lateral veins are thickened and somewhat branched.  Column is short and wide, trigonous in cross-section, greenish-yellow flecked with spots or lines of reddish-purple basally or at the margins, dorsiventrally compressed, succulent, slightly incurved at the apex and divergent from the lip.  The column is obtrapezoid when viewed dorsally with two spreading, fleshy column wings.  The clinandrium has three teeth at the apex, the central one wider and longer than the two lateral ones, and a bright yellow anther cap.

Barkeria shoemakeri has a very curious and highly discontiguous distribution.  The type locality is one of the hottest places in Mexico with a mean annual temperature of 27-28°C in an inland valley of the Balsas Depression known as “El Infiernillo” (the little hell).  But there are another 3-4 additional stations of this species that are sprinkled in an arc along the Pacific coasts of Guerrero and Oaxaca.  The stations are separated by hundreds of kilometers with no plants observed between them.

This species is scarcely known and was not discovered until 1975.  Since that time it has only been collected on a handful of occasions.  The plant seeks out very specific porophyte hosts and there can be large populations on these trees, but there may not be any additional plants established on suitable nearby trees.  The population at the type locality was a few hundred individuals when it was surveyed about 20 years ago, while the coastal populations are so widely dispersed that an inventory has never been attempted.  This species is seemingly very rare but this could also be because it is easily overlooked.

There are two disjunct and morphologically distinct populations of this species:  one is a coastal variant and is known from the coastline of Guerrero and Oaxaca, while the inland variant is known only from one small, remote locality in central Michoacán.  The two variants have differences in the flowers that distinguish them.  Namely, the coastal variants have flowers twice as large or more, usually paler in color (white instead of pink-lilac), and both the lip and petals are much wider than the inland plants.  The coastal variants seem to have a predilection for trees with thin or papery bark.  It seems to grow exclusively on trees of Calycophyllum candidissimum near the Oaxaca coast near Huatulco.  This tree species, known colloquially as “camaron”, has a smooth bark similar to that of Psidium spp.   It is also reported to grow on Bursera  sp. further south near the Isthmus of Tehuantepec.   In contrast, near the type locality B. shoemakeri will only grow in scrubby thickets of two particular tree species: Crescentia alata or Haematoxylon brasiletto.  In both cases, the plants are twig epiphytes and grow on trees near sandy streambeds that flow only seasonally in tropical deciduous forest.  The inland station receives only 800 mm of rainfall per year and so it is one of the driest, hottest and most inhospitable biomes for epiphytic orchids in Mexico.

Barkeria shoemakeri grows in a relatively narrow altitudinal band between sea level and 620 meters above sea level.  The inland station at 620 meters is actually much warmer and drier than the localities along the coast which receive moisture and cooling breezes on account of their proximity to the ocean.

This species is so infrequently encountered that the chances of accidently observing it in the wild are very remote.  It is known from only a few stations and where it grows it is generally the only Barkeria species there.  The species is easily identified when in active growth, though, on account of the very succulent, erect, lanceolate-acuminate leaves that are not characteristic of any other Barkeria species.  Also, the stems and abaxial leaf surfaces stippled with purplish-red spots are also not really seen in any other species.  Occasionally these spots appear in B. barkeriola, but not with the same pigment intensity or preponderance as observed in B. shoemakeri.  In any case, these two aforementioned species are perfectly separated by their biogeographic distributions and are not sympatric at any point in their respective ranges.  Additionally, B. shoemakeri has very obvious fusiform pseudobulbs whereas the other closely-related species in the Uniflora section, B. barkeriola, B. dorotheae and B. uniflora, do not.

This species blooms from very late in October to early January, but may rebloom a second flush of flowers from dormant side nodes on the rachis in the month of February if conditions are propitious (commonly observed in ex-situ greenhouse culture).

According to the Mexican government, this species is “Under Special Protection”.  This category was established to protect species that have large extant populations but which are vulnerable and may become threatened by over-collecting or habitat loss in the future.  The Pacific Coast plants are more attractive, but owing to the widely dispersed and isolated populations they are probably not threatened.  The plant is difficult to cultivate and rarely seen in collections.  But in contrast to most Barkeria species, this species is frequently pollinated in the wild and self-compatible; so capsule formation occurs frequently.  This means that if populations are disturbed or seriously impacted, there is the potential for them to autonomously rebound.

This species has not been used extensively in creating primary hybrids owing to its difficulty in cultivation and to the small size of its flowers.  But the eye-catching, contrast veining on the lip is a delightful characteristic that is heritable in hybrids.  Also, its remontant tendency means that hybrids frequently produce a second flush a blooms on the original inflorescence which can extend the interest season substantially.