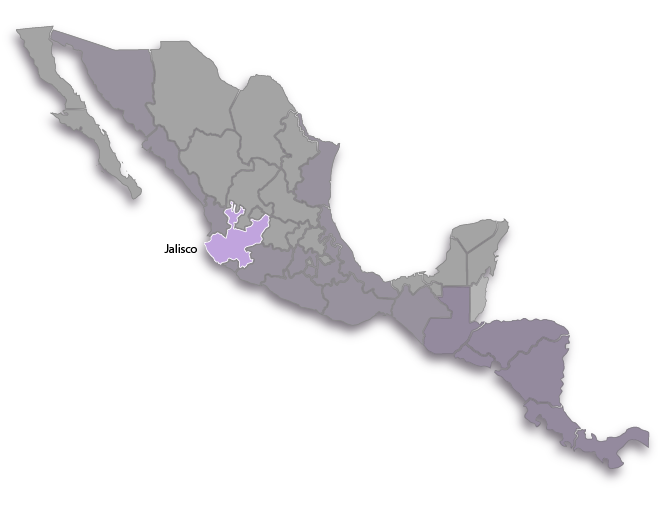 An erect, subcaespitose, lithophytic or epiphytic deciduous herb that grows between 5-100 cm.  Roots: flattened against the porophyte host or subterete, long, rarely branched, white in color with green tips.  Stems: grayish-white, thickened, fusiform, 3-20 cm. in length.  Developing stems are covered with membranous sheaths while older stems are covered with scarious, papery bracts.  Leaves: 2-7 lanceolate, acute, distichous, coriaceous to subsucculent, present only on the newly developing growth and appressed to the stem via an articulated joint.  Inflorescence: terminal, erect, straight, raceme, from the new growth, on an elongated subterete, rather thin peduncle covered by tubular bracts (scarious at anthesis) up to 80 cm. in length with 2-18 flowers.  Apical nodes on the rachis will sometimes develop into secondary branches and produce an additional flush of flowers.  Flowers: Attractive, resupinate, inodorous, 2.8-3.5 cm diameter spread, tepals lilac, lip lilac to pale lilac with white disk and darker spots on the lip apex.  Produced and maturing successively.  Lateral sepals are larger than the petals, obliquely lanceolate to subovate, acute.  Dorsal sepal is shorter than the petals, elliptic, acute.  Petals are obovate to elliptic-ovate, acute and basally unguiculate.  Lip is obovate, entire, occasionally emarginate, attenuate at the base and adnate to the column basally.  The lateral margins are reduplicate and give the lip the appearance of a saddle in wild-type clones.  The callus is comprised of two laminar, fleshy keels delimiting an elongated elliptic fovea.  Where they converge, three raised longitudinal keels develop, yellow in color with magenta spotting, the central one being the most prominent and reaching almost to the apex of the lip.  The column is broadly obovate, creamy white with the recurved wings yellow-green in color at the margins.  The dorsal surface of the column is suffused with dark purple spots while the anther is pale yellow.  The trigonous column is dorsiventrally flattened into a obtriangular shape with a shallow groove on the ventral surface.  The clinandrium topped with two lateral teeth.

This species does not have a “range” in the true sense since its known distribution is limited to what is essentially a pinhead on a map.  It grows near the town of Cihuatlán in Jalisco on the banks of the Marabasco River that divides the states of Jalisco and Colima.  Even though the locality is on a state border, the plants have only been observed growing on the northwest bank of the river in Jalisco and not in Colima.  Anecdotally, the total population of plants observed was concentrated in an area the size of a tennis ball court, even though suitable habitat is available for kilometers in every direction.  There is an herbarium specimen collected by Salvador Rosillo near Pihuamo, Jalisco, about 150 kilometers from Cihuatlán, which he determined to be B. dorotheae, but we have not been able to examine the specimen.  If this is correct, then its true distribution range is likely more extensive than what has traditionally been assumed.  It is expected that rigorous searches of nearby habitat would probably reveal additional stations in the future since there are no biogeographic constraints on its establishment at any point in the tropical forests growing along the coastlines of Jalisco or Colima.

One of the rarest of all the Barkeria species, this taxon is a micro-endemic similar to B. whartoniana or B. fritz-halbingeriana in terms of having an extremely restricted (relictual?) distribution.  It is exceptionally rare, with a concentrated population that is particularly vulnerable and sensitive to anthropocentric disruption. The population at the known locality was probably never more than a few hundred at the time of its discovery.  An anecdotal account from a researcher who visited the locality in 2007 mentioned that all of the plants that he observed were growing in a very small area, and that he could have conducted an impromptu inventory of the entire population in a matter of minutes.  There are no current estimates of the population, but the area has sustained direct hits from powerful hurricanes recently and the Jalisco government also  dredged and widened flood-control channels parallel to the Marabasco River.  sadly, both of these events may have already completely eradicated both the wild populations of this species and its last verified in-situ habitat.

As of this writing, this species has only been observed growing in a small patch of tropical deciduous forest along the shoreline of the Marabasco River that divides Jalisco from Colima.  The majority of the plants are lithophytic and are seen growing on rocks.  Additionally, a few plants were also seen growing on columnar cacti and the lower parts of small trees and shrubs close to the ground.  There is little variation in the annual temperature throughout the year with the average low temperature not falling below 19° and the high temperature being around 32°.  The climate is oppressively hot and humid almost all year but especially during the summer months when the highest temperatures are experienced along with frequent rainstorms.  During this time, the conditions are frequently overcast.  Interestingly, most of the plants observed in-situ­ were seen growing towards the east or northeast and escaping the intense sunlight of late afternoon.

Barkeria dorotheae grows at sea level at 20 to 50 meters in elevation.

Owing to its highly localized geographic distribution, it is unlikely that this species could be confused with any other member of the genus if it were observed in-situ.  Nevertheless, there are two species in the Uniflora section that grow in Colima and Jalisco that are similar in growth habit to B. dorotheae and these species could cause some confusion for an inexperienced aficionado.  These are B. uniflora and B. barkeriola.  In the case of the former, it grows at higher elevations and never at sea level like B. dorotheae.  Barkeria uniflora also has three clear characteristics that distinguish its flowers from those of B. dorotheae.  First, the sepals are subequal in shape and size whereas in B. dorotheae the dorsal sepal is conspicuously smaller than both the sepals and petals and it is distinctly incurved.  Second, the base of the lip is very attenuated and narrow in B. dorotheae and so is not wide enough to wrap around the base of the column like it does in B. uniflora.  Third, almost all wild plants of B. dorotheae have a strongly reduplicate lip, whereas most (but not all) wild plants of B. uniflora have lips that are mostly flat or at least convex.  With regards to B. barkeriola, it grows at low elevations but it does not typically get to sea level.  The stems, leaves and flowers are much smaller on the whole than equivalent plants of B. dorotheae.  The flowers of B. barkeriola have a very distinct dark magenta blotch on the lip apex, as does B. uniflora, but this apical lip blotch is never seen in B. dorotheae.  The shape of the lip in the two species is quite distinct, too, as the lip in B. barkeriola is convex and forms a cushion, but is not strongly reduplicate as in B. dorotheae with its characteristic saddle-shaped lip.  Also B. barkeriola, like B. uniflora, has a lip that does not attenuate basally and partially clasps the column.  Lastly, the tepals in B. barkeriola are splayed in a fan over the lip but their pattern of spread does not surpass 180°, unlike the arrangement seen in B. dorotheae.

This species blooms in November to December, but may rebloom a second flush of flowers from dormant side nodes on the rachis in the months of January and February if conditions are propitious (this is commonly the case in ex-situ greenhouse culture).

According to the Mexican government, this species is classified as endangered.  It is highly vulnerable owing to the small size of the populations and its restricted distribution range.  The collection of specimens from the wild does not seem to be a persistent threat, mostly owing to the fact that the exact locality has been a well-guarded secret.  Habitat loss also does not seem to be a huge risk because the area where the plants are established is in a delimited protected area.  Indeed, the biggest risk that the plants face is the potential for complete extirpation on account of natural disasters.  This could be from a forest fire, mudslide, flash flood or even a tropical cyclone; the latter have caused devastation to the area with some regularity in the past few years.

Generally speaking, the few hybrids that have been made using this species as a progenitor were made, we think, on the basis of curiosity and experimentation since the hybrids that resulted did not improve on either of the parents.  The reduplicate lip in this species is an extremely undesirable and typically dominant characteristic that can be inherited by progeny.  Also, the dorsal sepal is highly incurved and occludes the lip to a large extent.  Breeding hybrids using B. uniflora as a parent instead of B. dorotheae allows a breeder to impart all of the attractive features that one would want from B. dorotheae without its detractive, negative characteristics.