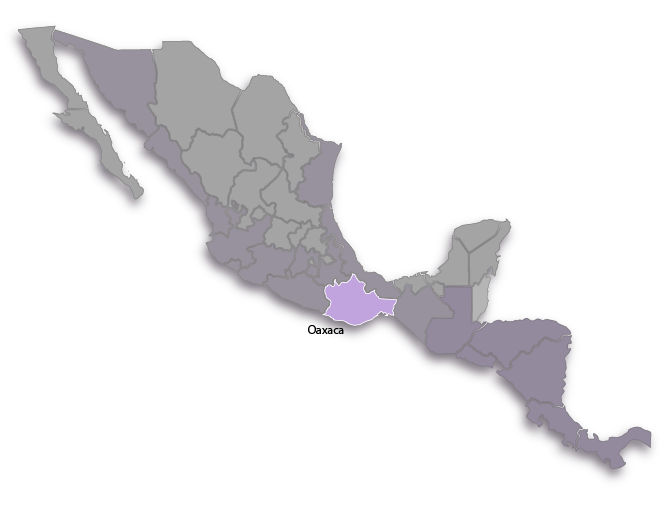 A scandent, deciduous herb with an epiphytic or rupicolous growth habit that grows to 70 cm.   Roots: thickened, terete, long, fleshy, white in color with green tips.  Stems: grayish-white, thickened, slightly compressed laterally with 3-11 internodes, 7-25 cm. in length.  Older stems are covered with scarious, papery bracts.  Leaves: 4-7 ensiform to narrowly ovate, acute, distichous, coriaceous to subsucculent, present only on the newly developing growth and appressed to the stem via an articulated joint.  Inflorescence: terminal, erect, raceme or panicle with 1-5 branches and each branch with 2-15 flowers, from the new growth, on an elongated peduncle covered by tubular bracts (scarious at anthesis) 15-30 cm. in length.  Flowers: Attractive, inodorous, 2.0-3.5 cm diameter spread, pinkish-lilac with a color intensity that varies from pale to saturated.  The abaxial surfaces of the incurved tepals are darkened.  The pink lip is paler than the tepals and darkens toward the apex.  The dorsal surface of the subtrigonous, straight-incurved, column is greenish-white and profusely suffused with dark purple spots.  The column is divergent and separated from the lip, dorsiventrally flattened into a spatulate shape with two prominent semi-elliptic column wings.  The sepals are acute, elliptic to oblong-elliptic, reflexed and either flat or slightly convex at the apex.  Petals are erect, acute to subacute, ovate-rhombic to elliptic-rhombic, thicker near the base and narrowing abruptly near the point of attachment.  The lip is entire, fused basally to the column to form a cuniculus, triangular-cordate, margins faintly undulating, erect at the base and slightly reflexed at the apex so as to give the appearance of a raised tip.  The callus is greenish-white or creamy-white with two oblong lamina that delimit a fovea, which converges into three raised longitudinal keels, becoming more elevated at the terminus and with the central one reaching all the way to the apex of the lip.   The keels are brilliant, clear yellow with the apical third pigmented with purplish stripes either directly over the keels or parallel to it.

This is a microendemic found in just one xeric, windy locality on the Pacific slopes of the Cordón Range in the southern portion of the Isthmus of Tehuantepec in Oaxaca, Mexico near the town of Nizanda.

An extremely rare species that is neither widespread nor with large populations.  A study by Segovia-Rivas et. al. published in 2018 conducted a detailed population analysis of this orchid species which revealed the presence of only 254 individuals in an area of .016 km2.  The entire theoretical range of this species is 26 square kilometers (10 square miles), but Barkeria whartoniana plants are only able to grow in an even more restricted habitat that makes up just 5% of the total theoretical range.  The known population of this plant in the wild is certainly less than 1000 individuals.

This species grows in tropical deciduous forest with a mean annual temperature of 27.6°C.  More specifically, it will only colonize as an epiphyte on the localized, rupicolous vegetation that grows on windswept, xeric escarpments of exposed limestone at the top of hillocks in this forest biome.  For unknown reasons, this orchid is never observed growing on trees that are growing in soil even though these species may be identical to those growing directly on rocks.  It is important to note that the xerophytic vegetation that grows directly on limestone is distinct from the prevailing vegetation in the region which is why the effective distribution range of Barkeria whartoniana is just a fraction of its theoretical range.  Barkeria whartoniana grows in both xerophytic scrub where the tree cover is sparse and also in tropical dry forest on exposed rock where the tree cover is 100%, but it seems to prefer colonizing areas with tree cover.  The plants are almost exclusively epiphytic with a preference for trees or columnar cacti; with only a handful of plants found growing directly on the limestone rock.  The plants are typically found on the northern or shaded side of their host plants.  There is a disproportionate specificity for the porophyte host to be Comocladia engleriana, a plant from the Anacardiaceae family related to poison ivy (Toxicodendron radicans), whose sap turns black upon exposure to air and causes excrutiating contact dermatitis in humans.  The next most common porophytes were Neobuxbaumia scoparia, a branching columnar cactus, and Plumeria rubra, a smooth-barked plant with fragrant flowers from the Apocynaceae family.

150-200 meters above sea level.  It is a working hypothesis of the authors of this website that Barkeria whartoniana is a relictual branch of the Scandens section, and, thus, that B. whartoniana is actually a highland species with growing requirements similar to Barkeria melanocaulon which grows 1600-1800 meters above sea level.  For some unknown reason, a small sub-population became geographically isolated during the desertification of Mesoamerica as the area around it became hotter and drier.  These plants became stranded on top of hillocks near Nizanda as the area around them became inhospitable to most orchidaceous plants.  It is true that Nizanda is extremely hot, but it is also only about a half hour from the windiest place in Mexico, the town of La Ventosa (the windy place) which is the epicenter of Mexico’s wind power generation plants.  We think that Barkeria whartoniana grows near Nizanda not because it requires searing tropical heat, but because the windy conditions are the only way that this highland-origin plant can survive under these extreme, xeric conditions.  For the grower, this means that these plants actually grow much better under intermediate conditions and by having its pot placed right in front of a window vent or fan in the greenhouse.

The plants cannot be confused with any other species in the genus on account of the lip being divergent from the column.  This characteristic can be consistently used as a diagnostic feature with 100% reliability.  For an extended discussion of additional differentiating features, please read the texts under the identification tab for ­both Barkeria melanocaulon and Barkeria fritz-halbingeriana, which are closely related species.

The bloom time in its natural habitat is from December to March, but when grown ex-situ in greenhouse collections the bloom time is extended by an additional two months on either side of that range (October-May).

This species is officially categorized as being “subject to special protection” according to the NOM-059-SEMARNAT-2010, a legislative memorandum created by the Mexican government with input from specialist researchers which establishes risk categories for native plants and animals.  The Mexican government thinks that this species of Barkeria is at risk of becoming endangered in the near future because recent habitat loss caused them to question the long-term viability of its populations.  But if there are less than 300 censused individuals then shouldn’t the designation already be changed to endangered or near extinct?  One positive is that the plant is one of the easiest species in the genus to grow from seed and it is relatively straightforward to cultivate ex-situ.

Unfortunately, Barkeria whartoniana’s most prominent and renowned characteristic, its divergent lip, is regressive when the species is crossed with other Barkeria species.  Thus, all of the progeny with this species in the background will exhibit lips that are appressed to the column.  But the species is still used in many hybrids on account of its attractive flowers whose sepals are upright.  This has the effect of showcasing the spotting on the back of the column and the purple lines that almost always appear on the lip.  Additionally, the species is relatively care-free and easy to grow, a characteristic that is heritable in the crosses.