The Eye-catching or Showy Barkeria 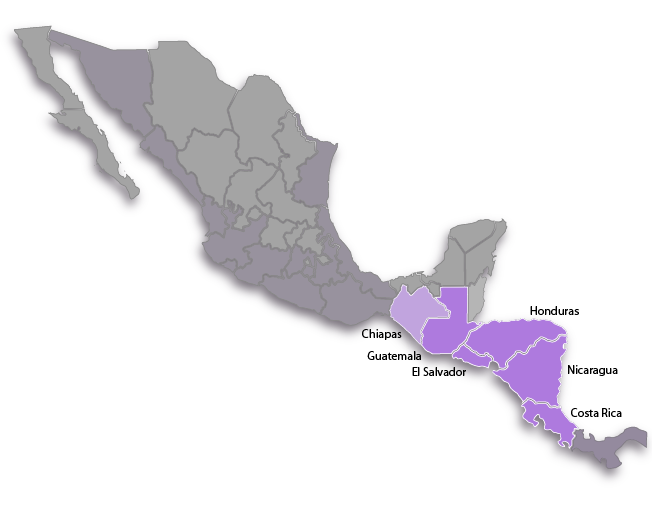 A slow-creeping or subcaespitose deciduous herb with an epiphytic habit growing up to 10-25 cm.   Roots: thickened, terete, long, minimally branched, white in color with green tips.  Stems: grayish-white, thickened, laterally compressed with 5-7 internodes, 3-15 cm. in length.  Older stems are covered with scarious, papery bracts while the newly developing stem is covered by imbricating folicaceous and non-foliaceous  bracts.  Leaves: 1-4 lanceolate to narrowly elliptic, distichous, coriaceous to subsucculent, present only on the newly developing growth and connected to the tubular clasping stem bracts via an articulated joint.  Inflorescence: terminal, erect, dense raceme, from the new growth with an abbreviated peduncle, 5-10 cm. in length and with 2-10 faintly-fragrant or odorless, pendant flowers.  Some exceptional wild specimens have been observed with 15-20 flowers, but in-situ specimens with more than 3-4 flowers are rare and any plant with double-digit flower counts is exceedingly rare.  Flowers: Showy, 4.5-7.0 cm in diameter, narrow tepals in pink, lilac or white tinged with pink.  The lip is white with pink margins and with spotting or irregular blotches of purple or magenta concentrated near the apex which if numerous may coalesce to form a blotch.  The dorsal surface of the narrow, straight, subtrigonous column is pink suffused with dark purple spots mainly along the margins with more intense red or magenta blushing at the apex.  The column wings are small and inconspicuous.  The sepals are narrowly elliptic and erect, reflexed.  Petals are laterally extended, lanceolate, and arched with slightly deflexed tips.  The lip is entire, ovate to oblong but with tremendous variability in shape, fused to the base of the column and apiculate.  Basally, the lip clasps the column, further up the midlobe is generally flat or lightly crisped with undulating margins while the distal portion may be flat, deflexed or conduplicate.  The callus is white with red lines underneath the column, but is yellow and white apically.  It has three longitudinal keels, the middle one is the most prominent and extends all the way to the tip.

Found throughout Central America from the southernmost state of Chiapas in Mexico all
the way to Costa Rica, but it does not reach Panama.  This encompasses Guatemala, Nicaragua,
Honduras and El Salvador, as well.

The plants are quite common throughout their distribution range with the exception of a small disjunct population in Costa Rica.  Unfortunately, they may be difficult to observe when not flowering owing to their small size, their habit of not forming large colonies and their deciduous nature.

These are common branch or twig epiphytes in the mid-elevation Quercus–Pinus–Juniperus forests that encircle the Chiapas Central Depression in Mexico.  Throughout their range they prefer to grow at the ecotone between xeric oak forests and the lowland deciduous forest, but they have a marked preference for sunny, exposed, well-ventilated sites.  This habitat is usually dry and even during the monsoon rainy season the plants will completely dry out during the course of the day. The rhizome of this species rarely branches and so specimen-sized plants are extremely rare.  That said, the plants are long-lived and it is not uncommon to see wild plants with a chain of 20-25 pseudobulbs trailing behind the most recent developing shoot.  The plants are said to be cold-growing perhaps on account of information in Orchids of Guatemala and Belize, by Ames and Correll, which indicates that they can be found as high as 3500 meters.  This is probably in error since the plants are almost never seen above 2100 meters at least in our experience. This species is capable of being grown in much warmer conditions ex-situ, but the plants require very brisk air movement over their large leaves.

1500-2000 meters above sea level, but observed more frequently at the higher portions of that elevation range between 1800-2000 meters.

The plants are easy to identify principally on account of their spring-blooming habit, a trait which is exhibited by only one other species in the genus: Barkeria melanocaulon.  Two noteworthy growth characteristics are that this species has a compact habit with only a few leaves at the apex of its stubby, stout pseudobulbs; and that the flowers only appear on the newest growth that has just finished development at the time of anthesis.  Also, the flowering raceme is on an abbreviated peduncle, a conspicuous characteristic that aids in the determination of unidentified plants perhaps found with old, dried inflorescences since no other species in the genus have this feature.  In some parts of Costa Rica this species grows sympatrically with Barkeria lindleyana, but the two species are quite distinct in terms of their flowering period, their height, the arrangement of flowers on the spike and the coloration of the flowers. The flowers of B. lindleyana never have disseminated, purple spots on the distal portion of the lip and instead have a darker blotch.

Plants are in peak bloom between April 15 and May 15 in their native habitat.  Barkeria spectabilis will bloom a scant few weeks before the rainy season begins at the beginning of June.  Interestingly,
all of its growth, development and flowering occurs entirely during the dry season.  Aestival monsoon rains or copious atmospheric humidity have zero effect on the timing of the plants growth cycle in nature since this is completely controlled by internal biological clocks that are very sensitive to daylength.

The species is not threatened although many hundreds of blooming plants are offered for sale each year by indigenous people in the markets of Comitan and San Cristobal de las Casas in Chiapas, Mexico.  However, the species is difficult to commercialize on account of its precociously senescent flowers and this protects it from more aggressive and indiscriminate harvesting.  The sad, withered flowers in the hands of the highlands natives speak more to the economic desperation of the people selling them, rather than being an inexpensive, propitious purchase by traveling orchid collectors visiting from Mexico City or foreign countries.

Barkeria spectabilis imparts several useful characteristics to hybrids and so it is one of the more common Barkeria species used for hybridizing.  Most noteworthy is the large size of its flowers, a heritable trait, which only Barkeria uniflora can rival in the genus. Additionally, many clones of this plant have beautiful spotting on the lip and column and these markings will usually breed true in first generation hybrids.  But perhaps the most interesting characteristic of Barkeria spectabilis, is its penchant for blooming in the spring.  Thus, when it is crossed with one of the other fall or winter-blooming species in the genus, the resulting hybrid will sometimes bloom twice per annum.  Apart from being a neat trick, this also allows flask seedlings to bulk up more quickly since they tend to develop and mature more than one growth each calendar year.  With regard to hybrids made with Barkeria melanocaulon, the only other member of the genus that will also has a spring/summer blooming period, something remarkable occurs in the hybrid progeny because they exhibit hybrid-vigor for some unknown reason.  In other words, the offspring that result from the hybridization between these two aforementioned species seem to exhibit discernable improvements to the phenotypes of both parents rather than a reversion to the mean as is usually the case in hybrids. Lastly, Barkeria spectabilis is perhaps the coolest-growing species in the genus and so hybrids made with it are sometimes more climate-tolerant for growers in higher latitudes or in some coastal cities.