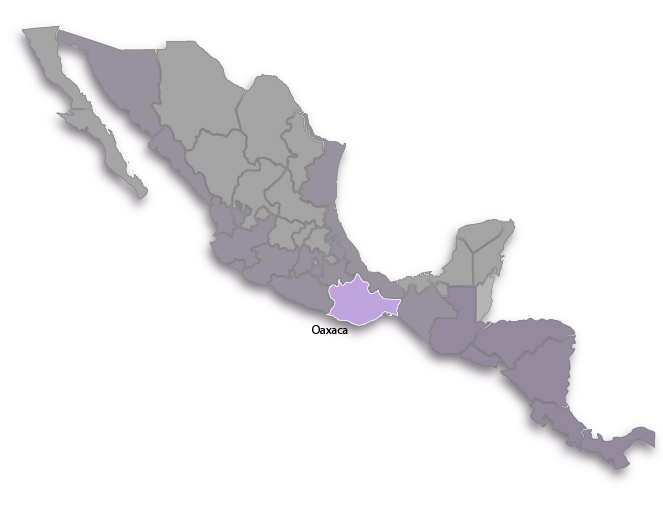 An erect, subcaespitose, deciduous herb with a rupicolous growth habit and reaching 120 cm. in height.  Roots: thickened, terete, long, and forming massive accumulations with age.  Stems: whitish, thickened, laterally compressed with 6-17 internodes but not terminating in well-defined pseudobulbs, 7-35 cm. in length.  Older stems are covered with scarious, papery bracts while the newly developing stem is covered by imbricating folicaceous and non-foliaceous  bracts.  Leaves: 6-12 ensiform, coriaceous to subsucculent, greenish-purple in color, present only on the newly developing growth and connected to the tubular clasping stem bracts via an articulated joint.  Inflorescence: terminal, erect raceme, on an elongated terete peduncle, 30-60 cm. in length, thin, and with up to 30 weakly-fragrant flowers.  Flowers:  Attractive but relatively small compared to the plant.  The tepals are ascending, incurved, pale-pink while the lip and column are descending.  Lip is pink with darker margins and a purple blotch at the apex.  Keels white or very pale yellow with purple lines and a greenish-white column blushed with pink along the apical midline and with purple dots and lines on the column wings.  Sepals are subequal, elliptic, acute, subapiculate, with seven-nerves and convex.  Petals more broadly elliptic than sepals, acute, reflexed at the apex and with 5 nerves.  Lip fused basally to the column forming a shallow cuniculus at the apex of the ovary, entire, oblong to oblong ovate, apex truncate, subapiculate, margins pleated, faintly undulating and erect basally so as to clasp the column.  Lateral margins are reflexed creating a reduplicate lip.  The callus is comprised of two fleshy lamina, delimiting a narrow elliptic fovea.  Where they converge, three raised longitudinal keels develop with the central one being the most prominent and reaching the apex of the lip.  The winged column is straight and appressed to the lip, subtrigonous in cross-section, dorsiventrally compressed and spatulate when viewed from above.  The ventral side of the column is basally concave forming a nectary in conjunction with the lip.  Clinandrium has three triangular teeth with the lateral ones projecting farther forward than the central one which is deflexed.  Anther cap is yellow.

The plant is known from only a few locations in the coastal foothills of the Sierra Madre del Sur mountains in Oaxaca, Mexico.  Additionally, there is an unconfirmed report that it was found in the hills near La Lobera, a small town on the outskirts of Oaxaca City.

This might be the rarest Barkeria species, and that’s really saying something when one considers the rarity and endemism of several of the species in the genus (e.g. B. dorotheae, B. strophinx, B. shoemakeri and B. whartoniana).  It is known from two collections at two different localities; but we do not mean to give the impression that we are talking about two populations of plants, instead we mean two individual plants of this species are all that have ever been found in the wild.  The author of this species, Miguel Angel Soto Arenas, noted in his description that he only managed to find a single plant at the type locality and concluded that it must be extremely rare.  All plants of this species in private collections are divisions or cultivated keikis from the original type specimen collected by Soto Arenas.

According to the description, the rupicolous plant grows directly on exposed granitic outcroppings in full sun at the ecotone between semi-deciduous tropical forest and warm oak-pine forest.  The type specimen was found on a granite boulder in a coffee plantation.

One specimen was found at 670 meters, while the other was found at 245 meters above sea level.  No additional information is available.

This species is probably closely related to B. whartoniana and B. melanocaulon.  Of these, the easiest of the three to identify is B. whartoniana on account of the lip being divergent from the column.  That characteristic is the sine qua non of that species, and an unmistakable tip-off as to its identity.  Additionally, the lips are quite distinct being triangular-ovate in B. whartoniana and oblong in B. fritz-halbingeriana.  With regards to the differences with B. melanocaulon, the flowers of B. fritz-halbingeriana have narrower floral segments with much reduced column wings and the lip is oblong with a purple splotch at the apex as opposed to being ovate and concolorous.

In addition to differences in floral morphology, Barkeria fritz-halbingeriana has several vegetative characteristics that also make this species distinguishable from its close cousins in Oaxaca and all other species in the genus with which it could be confused.  The stems in B. fritz-halbingeriana are tall, slender and distinctly foliaceous while the plant habit is conspicuously caespitose.  Furthermore, the plant has branched inflorescences with sequential flowers and a distinct tendency to form adventitious keikis.  No other species in the genus apart from this one is able to match all of these vegetative features.

The two known specimens were collected with flowers on June 14th and November 25th so these dates could plausibly indicate the beginning and the end of its blooming season.  The long bloom time makes logical sense on account of the sequential blooming characteristic of this species.  Since only 1-2 flowers are open at any time, but the plants produce 30+ flowers the plants can be in flower for an extended period of time.

This species is not officially at risk according to the Mexican government and does not merit any special protection, but this is likely because it is so unbelievably rare that there are not enough data points to make a proper determination about this species’ wild populations.  Undoubtedly, its designation should be changed to vulnerable, at a minimum, solely based on the criterion of the scarcity of specimens in the field.

This species has never been used in any crosses.