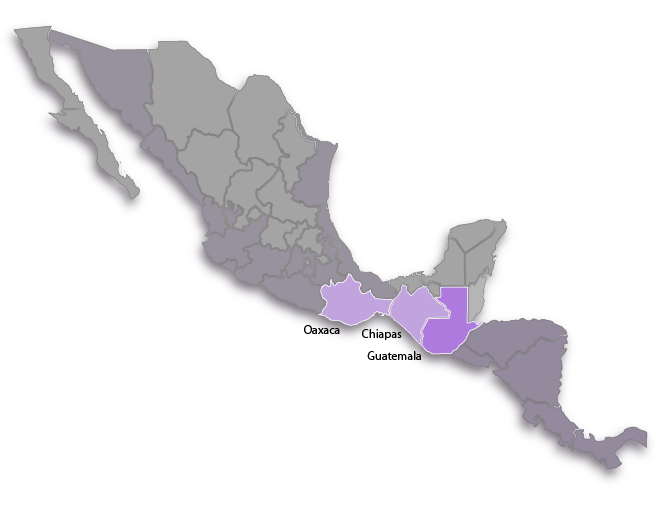 A subcaespitose, slender, deciduous herb with an epiphytic or lithophytic growth habit that grows to 75 cm.   Roots: thickened, flattened, long, fleshy, gray in color with green tips.  Stems: grayish-white, thickened, slightly compressed laterally with 3-9 internodes, 3-22 cm. in length.  Older stems are covered with scarious, papery bracts.  Leaves: 3-7, narrowly-elliptic to elliptic-lanceolate, acute to obtuse, dorsally carinate, distichous, reddish-green in coloration, coriaceous to subsucculent, present only on the newly developing growth and appressed to the stem via an articulated joint.  Inflorescence: terminal, sublax, simple raceme with 3-30 flowers, from the new growth, on an elongated peduncle covered by tubular bracts (scarious at anthesis) 8-60 cm. in length.  Flowers: Attractive, inodorous, 3.2-4.0 cm diameter spread, most commonly seen as intense magenta but also lilac-purple or pink-purple.  The dorsal sepal is erect, narrowly-elliptic to oblanceolate, acute to subapiculate, flat to slightly concave and sometimes carinate at the apex.  Lateral sepals are descending to reflexed, narrowly-elliptic to lanceolate, apiculate, flat to slightly concave, suboblique and with prominent carinate ridges at the apex.  Petals are extended, broadly-elliptic to ovate, slightly concave, acute to abruptly acuminate, basally unguiculate, and spreading in a plane at 180° but perpendicular to the column.  The lip is concolorous except for the presence of 3-5 brightly colored yellow keels, entire, ovate, abruptly acute to shortly acuminate, basally unguiculate and adnate to the entire column.  The exterior keels are thickened and raised as they join with the column to form a v-shaped callus in the center of the disc.  The central keel is more prominent and twice the length of the external ones.  The dorsal surface of the straight, clavate column is creamy-white and blushed with pink apically.  The column is subtrigonous in cross-section with rounded wings, somewhat compressed dorsiventrally, and ventrally sulcate so as to form a dry cuniculus with the lip.

This species is naturally present only in Guatemala and Mexico.  In Mexico it can be found on the inland slopes of the Sierra Madre de Chiapas as well as some contiguous localities at higher elevations in the Central Depression.   A disjunct population was recently discovered in the Mexican state of Oaxaca growing at the Cerro Atravesado in the Chimalapas mountain range by researchers.  In Guatemala, this orchid can be seen in the Sierra of the Cuchumatanes in the northwestern part of the country directly across the border from Mexico, and it also grows along the Sierra Madre de Chiapas mountains that extend southward along the Pacific coast of the country.  It appears that populations quickly disappear just a bit further south than Guatemala City and do not reach El Salvador.

The species is locally abundant and it can have populations in the thousands in its natural habitat where it grows.  That said, localities for this species across Mexico and Guatemala are not common and it could best be characterized as being a rare species.

This species is a bit of a trickster because although it is widely adaptable to many different types of habitats, it is not very common in any of them.  One would imagine that a species that can grow at so many different elevations would probably have widespread and abundant populations but that is not the case at all.  Let’s examine two different biomes at the lower and higher extremes of its elevation range.  First, in Oaxaca it was observed growing in evergreen seasonal forest at 1000 meters growing with many hot-growing orchid species such as Guarianthe aurantiaca, Trichocentrum cosymbephorum, Prosthechea cochleata, and Stanhopea saccata.  An evergreen forest at that elevation probably has many elements of what most people would identify as a tropical jungle habitat.  On the other hand, this species is also perfectly adapted to growing one kilometer higher up in a completely distinct biome.  In the area around Motozintla, Chiapas this species was observed on the slopes of the Tacaná volcano on the same oak trees as Epidendrum lacertinum where it grows at 2000 meters in elevation at the ecotone where oak forest mixes with evergreen cloud forest.  It also grows in pockets at different elevations throughout its altitude range which could be Pinus-Quercus forest or even tropical deciduous forest.

900-1900 meters in elevation.  In theory, the higher parts of its elevation range overlaps with that of Barkeria spectabilis, but in practice we have never seen the plants growing together and these two species can be considered to be allopatric.  The slight differences in elevation and the plant communities that become established along these altitudinal gradients in nature are subtle, but they are real.  Barkeria skinneri grows in the same type of forest biomes as Barkeria spectabilis, but always just a little bit lower and a little bit warmer.  It can be found growing in Pinus-Quercus forest but it is more common to find populations lower down the slopes of the mountain as the vegetation transitions to tropical deciduous forest.

The long racemes of magenta flowers and its distribution in Southern Mexico and Guatemala make it easily identifiable.  At first glance, it could be confused with Barkeria scandens on account of the flower color but these two species are perfectly separated in a biogeographic sense and their populations do not grow near each other.  The closest that these species get to each other is in Oaxaca where they grow only about 150 kilometers apart, but it is important to point out that the Isthmus of Tehuantepec is a barrier that prevents Barkeria scandens from moving into Central America and keeps Barkeria skinneri from expanding northward along the Sierra Madre del Sur into central Oaxaca and Guerrero.   Thus, the populations of these two species are never sympatric nor do they ever hybridize.  There are two important floral characteristics that make this species easily identifiable.  First is the recognizable shape of the flowers.  From some perspectives, the flowers can look star-shaped, but some populations have flowers with lateral sepals that are strongly reflexed and have petals arranged on a 180° degree plane which causes the flowers to look like a cross.  No other Barkeria species has flowers that look like this.  Second, Barkeria skinneri has 3-5 prominent yellow keels on an ovate lip.  This characteristic is diagnostic of this species since no other Barkeria has a lip with such conspicuous yellow keels.  Perhaps Barkeria whartoniana could also be mentioned since its keels are also yellow, but its divergent column makes it instantly recognizable and impossible to confuse with Barkeria skinneri.  Lastly, the star-shaped magenta flowers might also be confused with some darker clones of Barkeria naevosa or Barkeria strophinx, but these last two species have their flowers arranged in branched panicles and not in unbranched racemes as they are found in Barkeria skinneri.  Additionally, their distribution ranges are quite distinct from those of Barkeria skinneri.

This species blooms from October to December immediately after the cessation of rainfall in its natural habitat.  Generally, this species seems to bloom most heavily in the month of December.  In Mexico the plant is known as “Candelaria” in the Motozintla, Chiapas region.  In Guatemala the flowers are known as “Flor de San Francisco” and “La Aurora”.

According to the Mexican government, this species is “Under Special Protection”.  This category was established to protect species that still have large populations but are threatened by over-collecting.  The plants are commonly seen for sale in markets in both Mexico and Guatemala.

It is theorized, although unproven, that Barkeria skinneri is ornithophilous and that its flowers are adapted to pollination by hummingbirds (Trochilidae).  Its widely-spaced, inodorous flowers arranged on a raceme with an attractive magenta coloration are evidence of hummingbird pollination syndrome.  The flowers also exhibit obvious adaptations to this type of pollination because the column is fused to the lip along its entire length to form a tube and the bright yellow keels on the lip probably serve as visual nectary guides for the visiting birds.  Even the creamy-white color of the pollinia is quite distinct and different in color from all of the other Barkeria species where they are always bright yellow.  Hummingbirds have very good eyesight and so pollen that is brightly-colored would be assiduously cleaned or groomed off of their dark bills.  As previously mentioned, the flowers of B. skinneri have evolved a series of adaptations to facilitate pollination by hummingbirds, and further evidence for this can be found in the conformation of the tepals.  The lateral sepals are reflexed and held back behind the lip to allow easier access for a hovering bird to probe into the center of the flower without its wings coming into contact with the flower.  This conformational adaptation of the flower shape to allow for bird pollination is genetically dominant.  Therefore, many primary and secondary crosses with B. skinneri  strongly evince the role of this species in the resulting hybrids by how it “distorts” the beautiful symmetry of the flowers and arrangement of the tepals as seen in all of the other Barkeria species.  This is the unfortunate Achille’s heel of using this species in outcrosses with other members of the genus.  Thankfully, breeders have Barkeria scandens as an option when making crosses because it shares the beautiful magenta color with its cousin, B. skinneri, but it doesn’t have the unfortunate crippling defect of ruining the shape of the flowers.  Interestingly, many intergeneric crosses have used B. skinneri as the pollen parent in the hybrid and so this species could be key to realizing curious intergeneric hybrids with Barkeria and the rest of the Laeliinae subtribe.