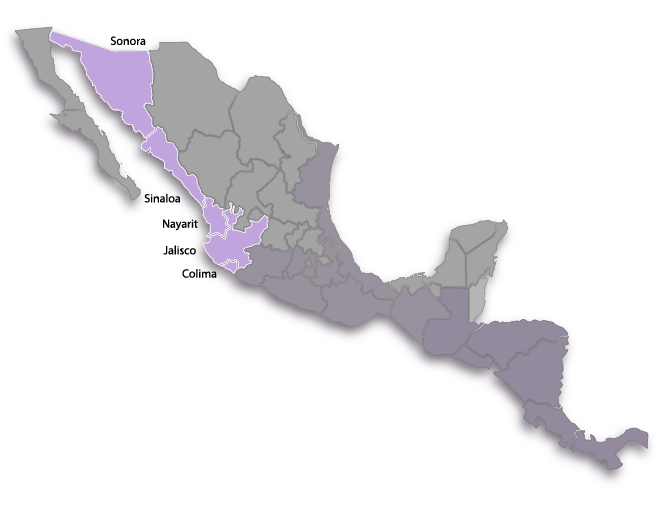 An erect, caespitose, deciduous herb with an epiphytic habit that grows 4-45 cm.  Roots: thickened, fleshy, flattened, whitish-gray to greenish-gray.  Stems: thin, fusiform, pedunculate (stalked), grayish-white, somewhat compressed with 3-7 internodes, 2-15 cm. in length.  Older stems are covered with scarious, papery bracts.  Leaves: 2-6, narrowly lanceolate, acuminate, distichous, basally obtuse or truncate, conduplicate, flexible, abaxially carinate, subsucculent, present only on the newly developing growth and appressed to the stem via an articulated joint.  The leaves are normally green but in high light conditions they can present as reddish-green. Inflorescence: terminal, erect (sometimes arching), 30 cm long raceme or panicle with 1-4 branches from the new growth with leaves present or drying at anthesis.  The subterete peduncle is covered with scarious, white, tubular bracts with 2-100 simultaneous flowers on a congested rachis often tinted dark wine-purple. The pedicel is thin, pink-purple in coloration, with an inconspicuous, ventral decurrent swelling denoting the position of a functional, shallow cuniculus (nectary) just below the perianth.  Flowers: Attractive, resupinate, pleasantly fragrant diurnally, 1.5-3.0 cm in diameter, somewhat flattened dorsiventrally with the pinkish-lilac tepals extended in the same plane in a flabellate arrangement not surpassing 180 ° and projecting forward over the lip.  The colors are extremely variable and have been reported as bright pink, pale pink, purplish-pink, purple and mutant variants are known that are white, semi-alba and even caerulea.  Lip is usually concolorous with the tepals (sometimes white) occasionally with yellow at the base with the keels creamy-white and a symmetrical arrangement of two rows of ascending red or reddish-purple streaks on either side of the keels radiating over the pattern of raised veins.  Sepals are subequal, linear-lanceolate to lanceolate, acute, adaxially carinate and apically recurved.  The lateral sepals oblique, cuneate basally, extended, and often concave or with revolute lateral margins while the dorsal sepal is erect.  Petals erect, lanceolate-elliptic, acute, and flat or longitudinally concave.  Lip is entire, extended, flat to slightly concave, obovate to elliptic, basally cuneate and adnate to the column.  The margins of the lip are erose to minutely denticulate while the edges are crisped.  The basal callus is a raised platform, elliptic, white with purple blushing and deeply sulcate with two oblong horizontal, fleshy lamella and raised veins sometimes with verrucose thickenings that radiate outward from the callus towards the lip margins.  From the distal end of the callus three white (sometimes tinged yellow), verrucose, longitudinal keels extend forward with the medial one almost reaching the apex of the lip.  The column is straight, subtrigonous, and dorsiventrally flattened into a obtriangular shape with a sulcate ventral surface.  Column is dorsally pink, ventrally whitish-green, short, clavate with two membranaceous, oblong column wings and capped with a prominent, fleshy, magenta-pink, (sometimes red or orange-red), saddle-shaped, bilobular anther cap.  The clinandrium is topped with three triangular projections.

The growing range of this species is the most northerly of the genus.  A plant was recently collected in the Mexican state of Sonora close to the border with Sinaloa which would be place its location at the same latitude as the southern tip of Texas or Central Florida in the United States.

In addition to its confirmed presence in Sonora, Barkeria palmeri is also known from the western Mexican states of Nayarit, Jalisco, Colima and Sinaloa.  There are two populations in the northern and southern part of its range that are very close to borders with adjoining states so it would not be surprising in the future to also have confirmed reports of its presence in Durango and Michoacán, respectively.

This species is frequently encountered throughout its range and at some of its stations could even be classified as abundant.  Be that as it may, the populations are probably even larger than estimated because this plant often grows high up in the canopy of trees and only dedicated botanists who are willing to climb into the tree can observe and count them.

This Barkeria grows exclusively as a stem or twig epiphyte on trees.  In the area around Boca de Tomatlan in Jalisco, this species grows in high-canopy tropical evergreen forest (jungle) dominated by high trees of Brosimum alicastrum and Cecropia obtusifolia.  It seems to have an affinity for trees with smooth bark such Plumeria rubra and Ficus spp. in this habitat.  It also grows in tropical deciduous forest and shrubby savanna habitats.  In these biomes it can be found growing on trees of Crescentia alata, Curatella americana, Vitex mollis, Byrsonima crassifolia and Bursera spp.  At higher elevations this species sometimes ventures into the tropical oak forest or semi-deciduous forest, but observations of this species there are less frequent.

For most of its range in Western Mexico, this species is the only member of the Obovata section that can be found there.  However, in the areas around Puerto Vallarta and Cihuatlán (both in Jalisco, Mexico), this species is sympatric with Barkeria obovata.  For all intents and purposes, these two species can only be distinguished when they are blooming since they are so similar in terms of their vegetative structures.  When flowers are encountered they are quite easy to determine mostly on account of their differing floral coloration.  Barkeria obovata has tepals in cream or white while B. palmeri has floral segments in tones ranging from pale pink at one end of the spectrum to purple at the other.  The lip outline in B. obovata is obovate and entire, whereas in B. palmeri it is usually elliptic but apically denticulate.  The pigmentation of the lips is quite distinct, as well, since B. obovata has sprinkles of reddish-purple dots without any discernible pattern and yellow, verrucose, poorly-defined keels; while B. palmeri has dark lilac pigment but only on elevated veins and the conspicuously tri-keeled callus.  Similarly, the anther cap in B. obovata is red but magenta in B. palmeri.  The nectary in B. palmeri is decurrent to the pedicellar ovary but it is just barely visible to the trained eye of a botanist.  It is not ventrally engorged or visibly swollen as in B. strophinx and B. naevosa.

This species begins blooming about a month later than the species in the Scandens and Uniflora groups at the end of November and continues for the first 6 weeks of the new calendar year.

This species is not at risk according to the Mexican government and does not merit any special protection.  Barkeria palmeri has robust populations and is known from many stations throughout its range.  It does not seem to interest collectors much perhaps on account of its finicky reputation for ex-situ culture.

In hybrids this species imparts floriferousness and highly branched inflorescences to hybrids.  The flowers are also sweetly scented and this seems to be heritable in some of its progeny.  One major negative of this species, that is also true of the other four species in the Obovata section, is that the dorsal sepal covers the lip.  Thankfully this is not a dominant trait and so subsequent crosses with members of the Scandens section are useful in raising the dorsal sepal so that the lip may be more easily seen.  This species is possibly the one with the most differently colored flowers of all the species in the genus.  Perhaps that is why so many color variants are known including semi-alba, alba, albescens and caerulea.